A report released today by the Observatory for the Protection of Human Rights Defenders (FIDH-OMCT) and İnsan Hakları Derneği (IHD, Human Rights Association, a member of FIDH and of OMCT’s SOS-Torture Network) documents and exposes the restrictions affecting the right to freedom of assembly, and their impact on the work of human rights defenders and other civil society actors in Turkey. In the aftermath of the July 2016 attempted coup, and two years after the end of emergency rule, respect for freedom of assembly – a basic tenet of societies founded on the rule of law and respect for human rights – has degraded, and the space for civil society has dramatically narrowed.

The report, titled A Perpetual Emergency: Attacks on Freedom of Assembly in Turkey and Repercussions for Civil Society, provides a snapshot of the situation in which civil society organisations and human rights defenders (HRDs) operate, documenting major trends and restrictions on freedom of assembly and association. It draws conclusions based on information and testimonies gathered through a wide range of sources and offers recommendations to national authorities and international actors on how to correct deficiencies as regards the right to peaceful protest and ensure an enabling environment for civil society and HRDs in Turkey. 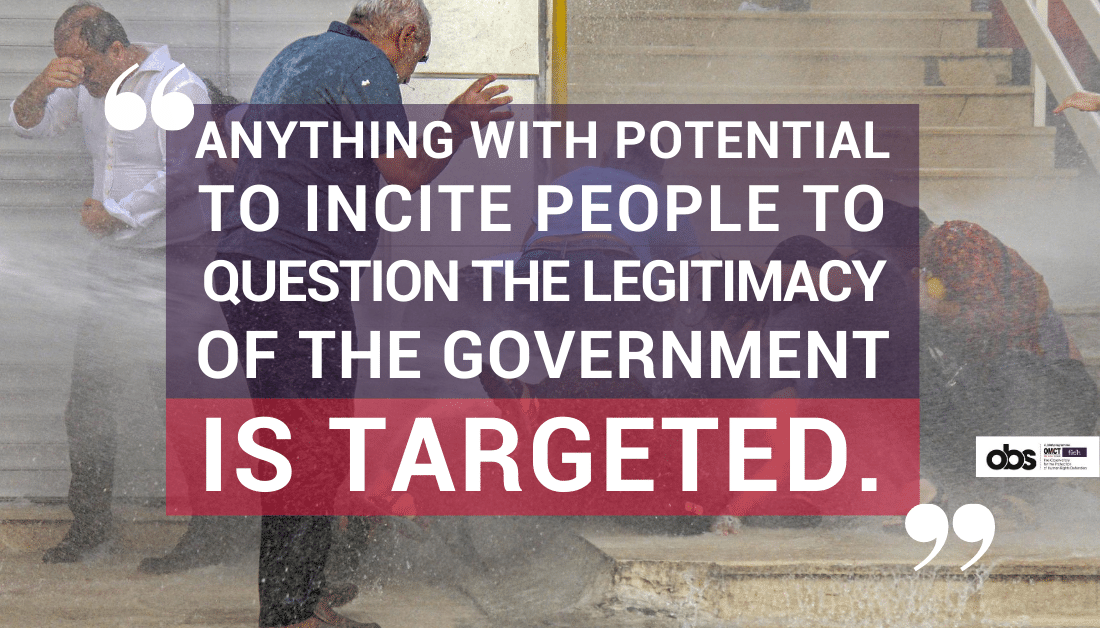 “In Turkey, all expressions of dissent – including through peaceful protest – have been systematically targeted and suppressed by the authorities”, declared Reyhan Yalçındağ, FIDH vice president and representative of IHD. “As a result, individuals and organisations that defend human rights have seen their capacity to criticise the government’s actions drastically shrink. Authorities must respect and uphold – not restrict – freedom of assembly, so that democratic debate is guaranteed and civil society may safely carry out its vital work”, she added.

The government crackdown on civil society has been pervasive in recent years and has progressively intensified in the wake of the 2013 Gezi Park protests, the 2015 collapse of the peace process between the government and the Kurdistan Workers’ Party (PKK), and the 2016 coup attempt, chipping away at civil liberties, including freedom of assembly and association. One civil society actor interviewed for this report remarked, “Anything with potential to incite people to question the legitimacy of the government is targeted.”

“Since the coup attempt, blatant violations of freedom of assembly in Turkey have continued at an alarming pace, with no end in sight for a crackdown that has repressed individuals and seriously inhibited human rights groups’ work”, concluded Gerald Staberock, OMCT Secretary General. “As the space for civil society has narrowed dramatically and constructive dialogue with the authorities appears to no longer be an option, it is time that international bodies intervene to help protect this right and discourage further erosion of it”.

In addition to providing recommendations geared toward the government of Turkey, the report elaborates extensive proposals for actions that international bodies can take – from the Council of Europe and the European Union, to the United Nations and the Organization for Security and Co-operation in Europe. Such actors can take steps including monitoring the situation, conducting visits to the country to assess the impact of rights restrictions on the work of civil society groups, raising concerns and issuing recommendations to the Government of Turkey through public statements and in diplomatic channels at both the bilateral level and in multilateral fora. 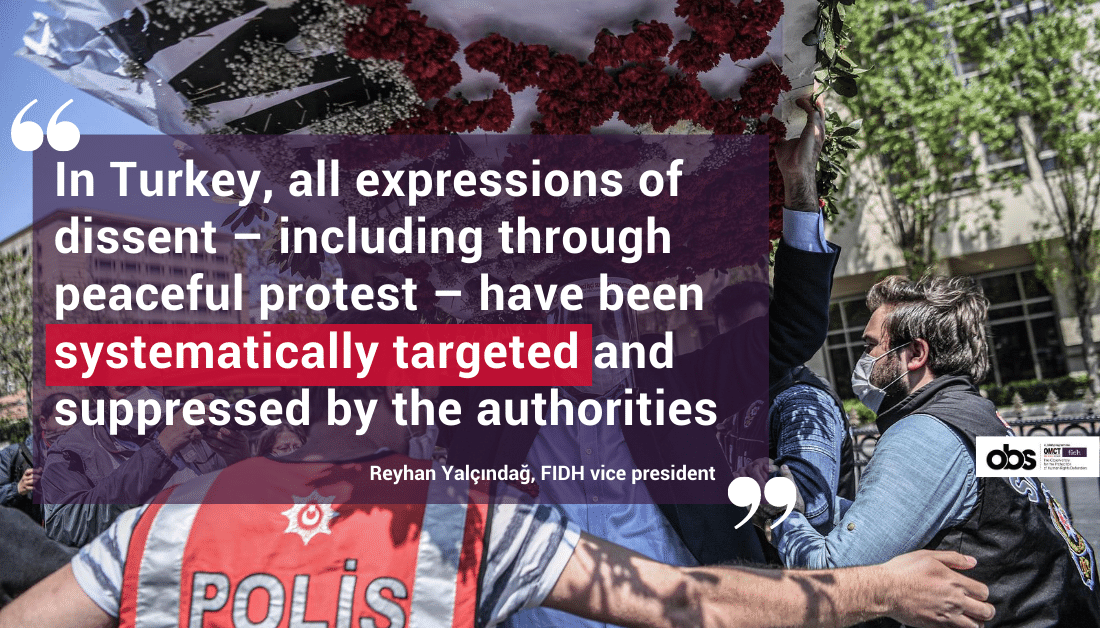 The report is the first in a series of two reports on shrinking civic space in Turkey, produced under the auspices of the EU-funded program ‘Comprehensive Support to Human Rights Defenders in Turkey.’ The program, managed by a consortium of NGOs, including International Federation for Human Rights (FIDH) and OMCT Europe, aims to support and build capacity for civil society and HRDs in Turkey, including through documentation of the situation and challenges they face. The second report, to be published this winter, will focus on freedom of association.

The state of emergency enacted in 2016 paved the way for governors’ authority to declare blanket bans on assemblies – a power that has been arbitrarily implemented, often without legitimate grounds. According to research by the Human Rights Foundation of Turkey (TIHV), between January 1, 2019 and January 31, 2020, authorities issued at least 147 decisions, in 25 cities, to ban all assemblies and events for a period ranging from 2 days to 395 days.

Lifting the state of emergency in July 2018 did not put an end to such restrictions and abuse. Indeed, the crackdown is showing virtually no signs of slowing, posing serious limitations to freedom of assembly. When protesters defy bans to exercise their right to assemble, they often face police violence – including violent dispersal of protests – and judicial harassment, with perpetrators of abuse enjoying impunity in most cases. TIHV’s data records that in 2019 the police intervened with force in at least 1,215 assemblies; during those, at least 95 people were injured, 3,980 were taken into police custody, 37 were detained, and 143 were subjected to other forms of judicial control, including travel bans, house arrest, and the obligation to report weekly to the police station. These measures unduly restrict people’s right to peacefully express dissent, contrary to Turkey’s constitutional and international obligations. Coupled with a negative public narrative, which aims at stigmatising and delegitimising protesters and civil society actors more broadly, by conflating them with terrorists, these practices have had a chilling effect on civil society actors, many of whom feel oppressed and prevented from speaking out and acting on human rights.

Indeed, while the state of emergency ended two years ago, many civil society actors in Turkey believe that de facto emergency rule persists, with emergency decrees having been incorporated into ordinary law and perpetuating restrictions to fundamental rights and the rule of law beyond the exceptional circumstances that may have justified their adoption. Furthermore, in most cases, the judiciary does not promptly and effectively intervene to prevent or redress rights violations, thus allowing authorities to continue abusing their powers. This leaves civil society with little remedy against arbitrary practices. One civil society actor interviewed for the report commented, “Courts cannot defend the freedom of assembly even if they wanted to; they don’t have the necessary protections to do so.” 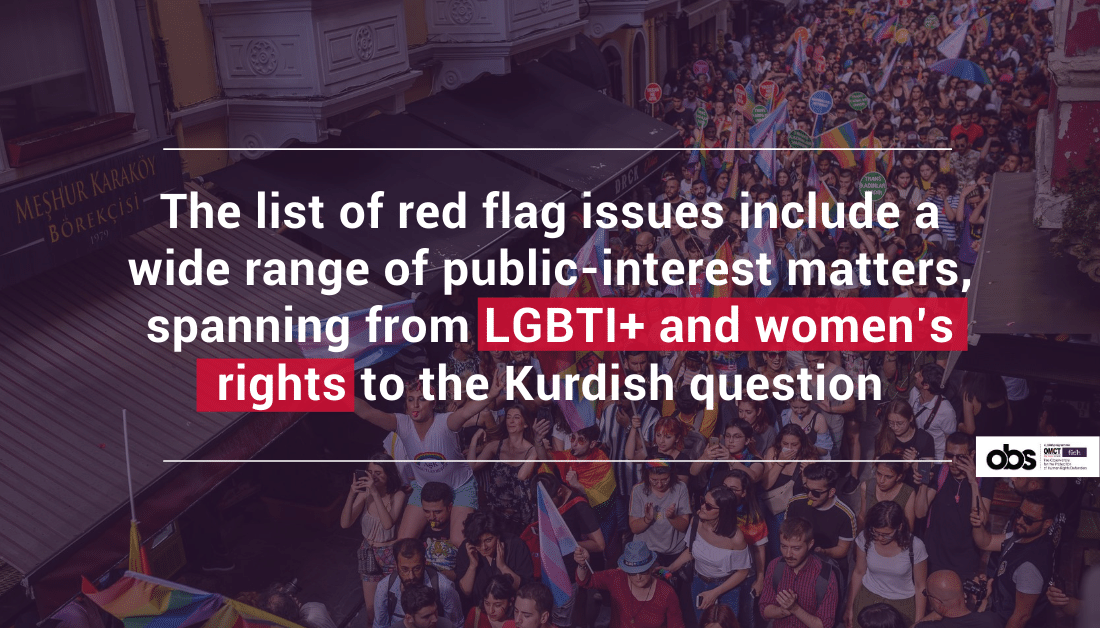 Certain civil society organisations and HRDs have been hit particularly hard by restrictions on freedom of assembly and have suffered disproportionately from the crackdown. Demonstrations on issues considered to be politically sensitive by the authorities are more likely to be banned and/or criminalised. The list of red flag issues may include a wide range of public-interest matters, spanning from LGBTI+ and women’s rights to the Kurdish question, Turkey’s military foreign policy, and the dismissal of public sector employees due to alleged ties with “terrorist groups”. LGBTI+ rights defenders were among the hardest hit by the emergency rule, with a blanket ban on all LGBTI+ related assemblies and events in the capital of Turkey. Currently, Pride parades are not allowed to take place anywhere in Turkey, and the LGBTI+ movement has found itself largely excluded from the public sphere, vilified by the authorities and the public, and prevented from conducting any of those activities that they had long been conducting without any obstruction. Similarly, the situation quickly escalated for women’s rights defenders in the aftermath of the emergency rule. As one of the last remaining groups publicly raising criticism on the government’s authoritarian and patriarchal policies, they were not exempt from the general repressive environment and the crackdown on freedom of assembly.

To read the full report please follow the link:

A Perpetual Emergency: Attacks on Freedom of Assembly in Turkey and Repercussions for Civil Society

The Observatory for the Protection of Human Rights Defenders (the Observatory) was created in 1997 by FIDH and the World Organisation Against Torture (OMCT). The objective of this programme is to intervene to prevent or remedy situations of repression against human rights defenders. FIDH and OMCT are both members of ProtectDefenders.eu, the European Union Human Rights Defenders Mechanism implemented by international civil society.

The Human Rights Association (IHD, İnsan Hakları Derneği) was founded on July 17, 1986, by 98 people, including lawyers, journalists, intellectuals, but mainly relatives of political prisoners. The sole objective of IHD is to carry out activities in defense of human rights and freedoms. In 1992, the statute was changed to cover humanitarian aspects as laid out in the Geneva Conventions. Since then, IHD has also criticized human rights violations of armed groups. IHD, together with its headquarters and 31 branches and representations, is Turkey’s biggest non-governmental human rights organisation and has been a member of FIDH since 1996 and EuroMed Rights since 1997. IHD is also a founding member of Human Rights Joint Platform (IHOP) which was established in 2005.