On 19 August 2019, the Ministry of Interior has released a statement early in the morning saying that Diyarbakır, Mardin and Van municipality mayors from HDP [Peoples’ Democratic Party] were removed from office and they were replaced by the governors of the same cities. For the details and outcomes of the decision, you can consult the “İHD-HRFT Joint Statement on HDP Mayors’ Removal from Office”.[1] Simultaneous operations against HDP members were conducted and 418 persons were taken under police custody on the same day. The operations against HDP and HDP members are still on-going.

The news reported by the media revealed that the Governor of Diyarbakır had lodged an application before the Ministry of Interior with a letter dated 1 April 2019 [merely a day after the local elections on 31 March 2019 and before the results being officially confirmed] for the removal of the newly elected Diyarbakır mayor from office. This attempt also proves that the decision of the Minister of Interior Affairs Süleyman Soylu is both against the law and is solely political and arbitrary. The document released by the media is crystal clear.[2] We assume that this arbitrary and unlawful attitude of the ministry will continue as the expressions used in the decision and the recent removals of local mukhtars [elected local authorities at village/neighbourhood level] from office to be replaced by trustees are strong indicators to this end.

The Central Executive Committee of the HDP announced on the same day that HDP would use any legal right to protest the decision and called on its members and all segments of the society to exercise their democratic rights to stand against the decision. The police prevented and intervened HDP MPs and politicians, members of HDP, lawyers, journalists and all peaceful demonstrators and dispersed the protests by using excessive force which led to the violation of the right to peaceful protest and prohibition of torture and ill-treatment. The attacks of the police are still on-going in the provinces where protests are staged.

The fundamental rights of MPs, politicians, lawyers, youth and children, women -particularly freedom of expression and peaceful protest, prohibition of torture- which are under the protection of and guaranteed by national laws and international conventions are being continuously violated by the authorities and the police since 19 August 2019. The visual evidence -photographs and video footages- for the violation allegations are also provided below. The total number of the detainees in police custody in all provinces including Diyarbakır, Van and Mardin has already reached 1000. The incidents during police interventions are mere instances of police brutality, ill-treatment and torture. During the protests in Diyarbakır, HDP MP for Batman province Feleknas Uca sustained a major blow on her leg and was hospitalised. HDP MP for Batman province Ayşe Acar Başaran was also hit on the head and blacked out. She was hospitalised as well. Journalists Ahmet Kanbal, Mehmet Şah Oruç, Rojda Aydın, Nurcan Yalçın, Halime Parlak and Yelda Çiçek were reportedly detained during the protests in Mardin while following the incidents during the police intervention. A 12-year old child was detained having been beaten in Ankara and rear-handcuffed against the clear prohibition of the law. A group of police officers beat a protester with truncheons and helmets in Van. The police also prevented lawyers from issuing public statements in front of courthouses in İzmir and İstanbul. 27 persons including 26 lawyers were detained during the police intervention in İzmir.

The police intervened and dispersed the protests in Diyarbakır by using water cannons, tear gas and truncheons. HDP MPs Ayşe Başaran and Feleknas Uca were beaten and hospitalised during the intervention.

For video footage of the police intervention: https://youtu.be/Rm540o3if7Q

The police intervened the public statement of the lawyers in front of İzmir Courthouse and detained 26 lawyers and another civilian beating them. 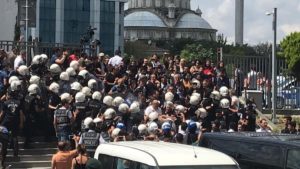 Lawyers in İstanbul issued a public statement in front of Çağlayan Courthouse. The police prevented the lawyers and dispersed them by using force.

For video footage of the police intervention: https://youtu.be/NSCTnTX4vcE 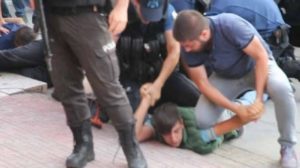 The police detained 17 persons including a 12-year old child during the protests in Ankara. The photo reveals the conduct of the police towards the child and the child was rear-handcuffed during the detention. 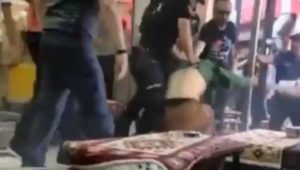 A protester was detained in a shop during the protests in Van. A group of police officers beat the protester in the shop and on the street by using truncheons and helmets. 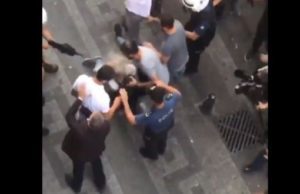 During the protests in İstanbul, the police detained demonstrators beating them. The police also used pepper ball/rubber ball weapons from a very close range with a deliberate attempt to harm the protesters.

For video footage of the police intervention: http://www.krttv.com.tr/kadikoy-de-kayyum-eylemi-yapan-vatandaslara-polis-yakin-mesafeden-plastik-mermi-sikti-video,949.html

The political power has adopted Law No. 7145 on the Amendment of Some Laws and Emergency Decrees that rendered the SoE permanent on 25 July 2018 at the Grand National Assembly of Turkey (GNAT). This law has gone into effect on 31 July 2018 following the president’s ratification. The law grants the governors broad powers for 3 years to conduct State of Emergency practices.[3] Procedures and practices that will give way to the violation of Article 34 of the Constitution and Article 11 of the ECHR, which designates the right to assembly and demonstration, has been paved for by granting governors such new powers as restriction and early dispersal of meetings and demonstration. In this respect, all the meetings and demonstrations including public statements, press statements, sit-ins were banned by governors in several provinces including Diyarbakır, Mardin and Van provinces. And security forces are using excessive force to prevent any peaceful protest and the measures taken by the police are leading to torture and ill-treatment beyond police brutality. The recent statement of HRFT draws a clear picture of the incidents.[4]

Consequently, İHD underlines its demand for and invites international community to take urgent action for