A report from the Observatory for the Protection of Human Rights Defenders (FIDH-OMCT) and İnsan Hakları Derneği (IHD, Human Rights Association, a member of FIDH and of OMCT’s SOS-Torture network) documents the restrictions affecting the right to freedom of assembly in Turkey, including for women’s rights defenders.

First published in July, the report is launched today in Turkish, coinciding with the commemoration of the International Day for the Elimination of Violence Against Women. Following the July 2016 coup attempt, and over two years after the end of the state of emergency, respect for freedom of assembly has deteriorated in Turkey and the space for civil society, including the women’s rights movement, has significantly shrunk.

As the world celebrates the global fight against violence against women and pays tribute to survivors of gender-based violence, the report, entitled “A Perpetual Emergency: Attacks on Freedom of Assembly in Turkey and Repercussions for Civil Society”, shows how women’s rights organisations and activists are affected by restrictions to their right to assembly, and suffer disproportionately from repression and a political climate that is not conducive to their work, but rather obstructs it. 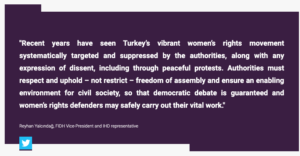 “In Turkey, recent years have seen the country’s vibrant women’s rights movement being systematically targeted and suppressed by the authorities, along with any expression of dissent, including through peaceful protests”, declared Reyhan Yalcındağ, FIDH Vice-President and IHD representative. “Authorities must respect and uphold – not restrict – freedom of assembly and ensure an enabling environment for civil society, so that democratic debate is guaranteed and women’s rights defenders may safely carry out their vital work”, she added.

The women’s rights movement in Turkey had long enjoyed an air of legitimacy, and advancement of women’s rights had been perceived by the authorities as a more “acceptable” human rights agenda. When the state of emergency was declared, following the failed coup attempt, the women’s rights movement – with the exception of Kurdish women’s rights defenders – was not among the first to be targeted. However, the situation quickly escalated for them too: as one of the last remaining groups publicly criticising the government’s authoritarian and patriarchal policies, they did not remain immune to the general repressive environment and the crackdown on fundamental rights and freedoms, including freedom of assembly.

In Istanbul, the ban on public gatherings in Taksim Square, traditionally a symbolic site for women’s rights protests, remains a source of conflict between women’s rights activists and the authorities. The restrictions on emblematic women’s rights demonstrations in Taksim Square, including the ones organised on November 25 (International Day for the Elimination of Violence against Women) and March 8 (International Women’s Day), were first introduced in late 2017 and have progressively intensified since. In 2019 and 2020, the demonstrations were banned by the Governorate in Istanbul and repressed in a particularly severe manner.[1] On both occasions, and despite the ban, women took to the streets and were met by a violent reaction from the police, who dispersed peaceful protesters using tear gas and plastic bullets. On March 8, 2020, for the first time, the police took 34 protesters into custody on International Women’s Day and used excessive force against some of them.

The situation is even more dire for Kurdish women’s rights-defenders, who have been facing immense pressure since the beginning of the state of emergency. All critical women’s rights organisations in the southeast were shut down by emergency decrees, and civil society actors in the region, including women’s rights defenders, have been subjected to an unprecedented crackdown. Under the pretext of fighting terrorism, Kurdish women’s rights organisations and defenders have been criminalised, and subjected to police raids, judicial harassment and arbitrary detention, in part for participating in public demonstrations and other activities contesting violence against women. Many of them remain behind bars.[2] A defender from the region described the situation as follows: “Outdoor assemblies, indoor events and social media posts are all criminalised; I don’t know how we are supposed to demand our rights silently.”

Women’s rights defenders are not the only ones prevented from exercising their right to freedom of assembly. Over the past four years, various groups, including trade unionists, lawyers, peace activists, LGBTI+ people, environmental rights defenders, and public sector employees dismissed from their positions by emergency decrees, have faced stigmatisation, criminalisation, judicial and administrative harassment, police violence, and even detention for the legitimate exercise of their right to protest. These measures unduly restrict people’s right to peacefully express dissent, contrary to Turkey’s constitutional and international obligations, and stifle democratic debate and democratic oversight over public action.

“Since the coup attempt, blatant violations of fundamental rights, including the right to freedom of assembly, have grown at an alarming pace, with no end in sight for a crackdown that has severely restricted individual freedoms and inhibited human rights groups’ work”, concluded Gerald Staberock, OMCT Secretary General. As the space for civil society has narrowed dramatically and constructive dialogue with the authorities appears to no longer be an option, it is time for the international community to take responsibility for helping protect human rights and civic space and preventing its further erosion.”

The report is the first in a series of two on shrinking civic space in Turkey, produced under the auspices of the EU-funded programme “Comprehensive Support to Human Rights Defenders in Turkey“. The programme, managed by a consortium of NGOs, including FIDH and OMCT Europe, aims to support and build capacity for civil society and human rights defenders in Turkey, including through documentation of the situation and the challenges they face. The second report, to be published in the spring of 2021, will focus on freedom of association.

[1] For more information please see, The Observatory, Statement – Turkey: Women’s Rights Defenders in the Crosshairs (December 20, 2019). Available at: https://www.fidh.org/en/issues/human-rights-defenders/turkey-women-s-rights-defenders-in-the-crosshairs; the Observatory, Statement – Turkey: No Justification for disproportionate use of force against peaceful women’s rights march (March 13, 2020). Available at: https://www.fidh.org/en/region/europe-central-asia/turkey/no-justification-for-disproportionate-use-of-force-against-peaceful